This block is broken or missing. You may be missing content or you might need to enable the original module.
The Future of Integrated Business Planning Systems
May 3, 2018 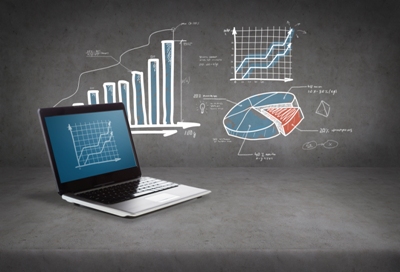 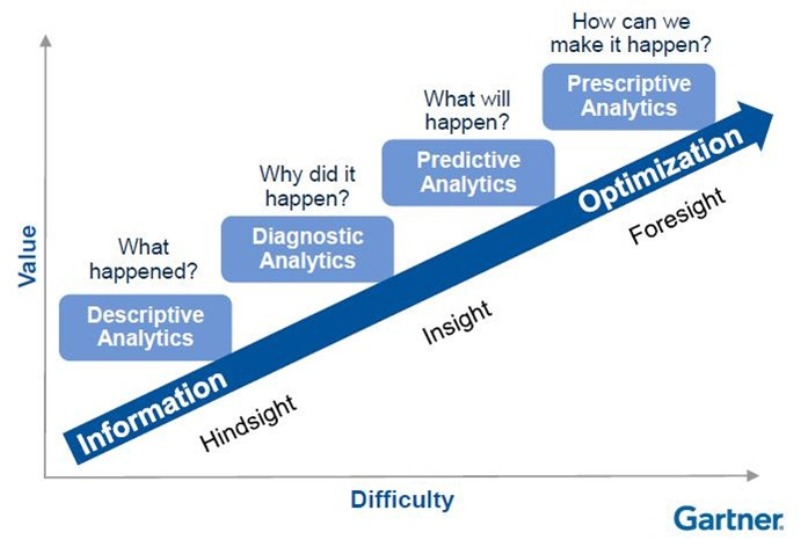 Companies like River Logic, model financial and operational business constraints and use prescriptive analysis to optimize a business objective. The business objective can be to maximize an asset, maximize throughput or minimize capital use and cost. Or all of the above at once. In combination with Integrated Business Planning to provide visibility and manage change in model assumptions and constraints, this creates a powerful and holistic scenario and decision making capability for executives.

The evolution of map technology

If we take this analogy a little bit further, Integrated Business Planning and prescriptive analysis can learn from GPS and the evolution of the underlying map technology.  Only 15 years ago we still used paper maps in our car. The first commercial GPS systems were launched in the 80’s. TomTom, a Dutch mapmaker and traffic company launched their first portable GPS system in 2002. In December 2015, TomTom launched the world’s first commercially available near real-time updated map. Let’s have a look how they got there and what is next. Let’s open our minds and have a look at trends in the mapping, traffic and the car industry and see what prescriptive analysis and IBP can learn from it.

Map making and maintaining used to be an expensive exercise, where you needed to drive lots of cars around every street over and over again. TomTom made deals with tech giants like Apple and Uber to provide automated data input to their maps. Millions of iPhone users and Uber drivers continuously send information to the TomTom database, which is used for mapping, traffic and route analysis to update a standard maps almost real time.

We can easily imagine a prescriptive analytics phase where the optimization model is automatically updated with macro assumptions and constraints like GDP, consumer spend, oil prices and total market capacity. Dynamic micro assumptions like capacity, downtime, material availability can come directly from intelligent machines. This creates dynamic constraints in the optimization model.

Advanced Driver Assistant Systems (ADAS) are already capable to warn drivers for upcoming traffic jams and many middle class cars already operate with automatic break control in city traffic. Some cars like the Mercedes E-class, can take this further and automatically take over the steering wheel when a driver loses control of the car.

With dynamic data input in the optimization model, prescriptive analysis can create alerts and intervene before a certain threshold of a critical resource or constraint is reached. An asset can be almost at capacity or underused, cash can dry up, or throughput can reach unsustainable limits.

TomTom has presented a 3D map of Germany and Michigan, in support of the German and US car industry. It has 3D maps in Silicon Valley in support of US tech companies and is partnering with Bosch - a world leading German electronics provider to the car industry - to make rapid progress to 3D map other parts of the world. 3D maps provide a 360 view of the road so a car knows where important landmarks, every lane, traffic sign, building or traffic light is and includes road geometry like curves and slopes. 3D maps are required for highly automated driving (HAD) and in combination with sensors on the car for autonomous driving (AD).

Optimizing our own business with prescriptive analysis is like a 2D map. Now add to that the impact competitors, suppliers and customers have on your business within your industry. Now imagine the impact of other industries, countries, the weather and geopolitics. In our connected, interdependent global world, similar to a 3D map, we will require multidimensional network prescription and optimizing.

Cars like the Mercedes e-class and Tesla S model already can change lanes autonomous and park the car without the driver being in the car. Audi will launch a HAD version of its flagship A8 in 2017. Elon Musk recently told analyst that Tesla is two years away from self-driving cars. Google has accumulated a millions kilometres of autonomous driving. McKinsey recently predicted that 15 percent of new cars sold in 2030, could be fully autonomous. Soon humans don’t have to touch a steering wheel.

We already know based on research that humans better not touch a short term forecast as we are riddled with bias and emotions. We already let demand sensing take over short term forecasting and replenishment decisions. It is not hard to imagine prescriptive algorithms take over tactical and strategic decisions in a distant future. This will create prescriptive execution.

In some existing self-driving cars, the driver has to touch the steering wheel every now and then to let the car know he is still there and awake. In the future this will not be needed anymore. Cars are idle for over 90%. All this wasted capacity will once be used by intelligent systems. Every car will be connected. In cities, less people will own cars. Public ride shares and taxi bots will rule the cities and take you where you need, drop you off and go to their next ride. This requires artificial intelligence (AI) and deep machine learning.

Google’s AI team has beaten a top human player in the game of Go, a 2,500-year-old game that is exponentially more complex than chess. IBM’s self-learning machine Watson, capable of beating world chess masters and the average joe at jeopardy, is available commercially for any business. It might be a small step for an AI algorithm to not only prescribe the best solution and take the decision to implement it, but also prescribe changes to the optimization algorithm afterwards to incorporate learnings and newly detected circumstances. The prescriptive algorithm will become self-learning and self-sustaining.

Collaboration to reach the holy grail

Only 15 years ago we were using a paper map to find our way around in our car. Due to a common vision for the holy grail in the car industry – the autonomous car - map makers, tech companies, the car industry and suppliers to the car industry all joined forces. There is also urgency due to healthy competition, as the car industry itself feels threatened by the tech giants’ entry into their industry. Due to this collaboration, competition and urgency, commercially available self-driving cars will become a reality in the next five years. Who would have imagined that 15 years ago?

Prescriptive analysis and execution might just be the holy grail of integrated business planning and business optimization. Maybe the biggest learning from the mapping and car industry is what can be achieved if powerful coalitions are made to chase a holy grail.

The future of IBP and prescriptive analysis

My on-line research indicates that over the last three years collaborative planning with customer and suppliers have increased, but most businesses still use IBP within the boundaries of their own company walls. And although more than half of my survey participants indicate they integrate financial planning & budgeting as a key task in their IBP process, it is likely that this is supported by slightly dis joined predictive analysis. Therefore, most companies will operate in the bottom left corner of below figure. 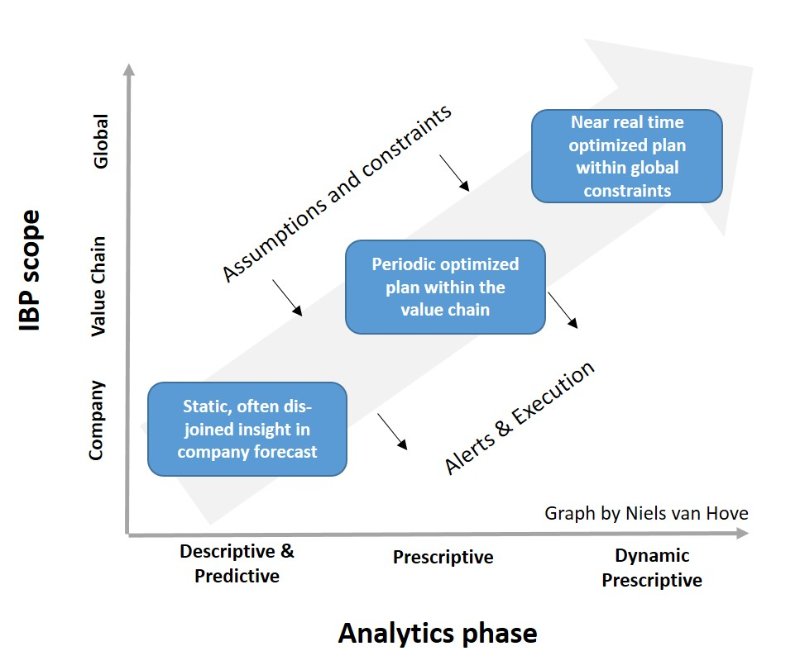 In terms of understanding constraints, risks and opportunities, the future of IBP will be to plan across the whole value chain, rather than within the company walls. A final step in IBP scope will be to understand and incorporate constraints from interdependent value chains, commodities and countries to create a global view.

This will end when artificial intelligent and self-learning systems tune the optimization algorithm and govern and change the constraints and assumptions it uses automatically. Similar to the driver in a highly autonomous driving car, who has to touch the steering wheel to let the software know he is still awake, executives might have to let the AI algorithm know they’re watching the integrated business planning decisions and numbers it produces.

We have a long way to go before we’re at that stage, but if we use our imagination, we can see how prescriptive analysis is only the start of a new IBP era.