Analytic models are rarely static. Their aim is to model the organisation in such a way as to allow managers to investigate what is actually going on and to assess changes to the way it operates. These changes may include looking at price/cost structures; the way in which departments are organised; partnerships; outsourcing; or introducing new products/services into new territories.

In each investigation, the model being used will evolve as new information is uncovered that impacts into what is being analysed.  The following graphic illustrates these major steps in a model’s evolution: 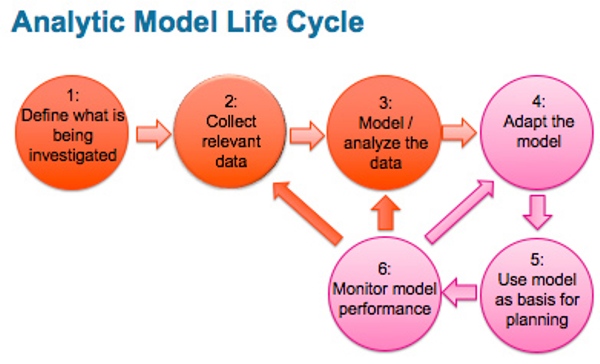 By way of example, I will use my experience in a real situation, to explain each phase of development.

Define what is being investigated

A number of years ago I was involved in an exercise with a major brewer as to what areas of the business were the most profitable.  As profitability was the main focus, the model concentrated on the different sources of income and associated costs.  They brewed beer which was sold through pubs they owned as well as other outlets such as supermarkets, restaurants and independent pubs. They also sold products such as wines and spirits bought in from other suppliers – all of which were put into the model so that profitability could be calculated by brand and outlet over time.

Now the model was built we had to find the data.  As a tip, don’t create a model from the data that is to hand – first model what you need and then go find the data.  Of course we didn’t have all the data we needed, so estimates were made but noted that they were estimates.  As models evolve, you might need to consider replacing these estimates with systems that can supply facts.

Once the model was completed extensive analysis of the data was performed.  This was done by posing a number of questions such as ‘How has profitability of beer changed over time compared to spirits?”, and ‘Which locations have the lowest cost/structure per unit sold’.  We were using a specialised analytic system so answering these questions was quite easy.

What surprised us was the answers.  It appeared the most profitable area of the business was the product labelled ‘Other’, which was a ‘catch all’ for revenue that didn’t fall into beer and spirits.  So the model was adapted to look at ‘Other’ in more detail. This revealed that most of the organisation’s profits were coming from the gambling machines placed in the pubs they managed.  The organisation thought they were a drinks company but in fact they had become part of the leisure industry.

Use Model as a basis for Planning

Now profitability was understood, arrangements were made to improve this through targeted marketing campaigns, incentives and restructures.  The model again was adapted for these and now used to assign budgets and predict future performance.

The last step was then to track performance to see whether the changes were having the right effect.

Of course, this isn’t really the last step.  And that’s because the world we live in isn’t static. There will always be more/different competitors, the markets will continue to change – and so must our analytic models. Models are never finished – they need to continually evolve if they are to be of any real use.

This article was originally published in ​prevero Blog